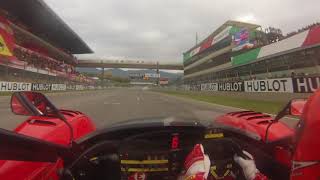 1997-2000 – Donkervoort Cup
Around 6 to 8 race events per year in Netherlands, Belgium and Germany. As a beginner particpating in the back of the grid and happy to reach the finish. In the last year several 5th and 6th places.

2001-2003 – Ferrari Challenge
With the Ferrari 360 Challenge in a European Championship with between 30 to 35 cars on the grid in the gentlemen’s series. The Championship was organized on the most popular race tracks around Europe with 8 racing events and 16 races per year. No podium places in the first year. Learning by doing. In 2002 I competed for a podium place in almost every race with the highest possible end result, being European Champion of the Ferrari Challenge in the Gentlemen’s Series. Due to being champion I had to race in the highest class in 2003. Best result a P.2 in Zandvoort.

2011 – Endurance racing with BMW and a competition in Assen with a Ford Mustang.
Several podium places.

2012 – GT Open Championship with Ferrari 458 GT3 and
SupercarChallenge Championship with BMW Z4M GTR
An amazing experience in the GT Open events. A fantastic car, beautiful race tracks around Europe, a professional race team with AF Corse and a grid fully loaded by GT2 and GT3 cars with top drivers behind the wheel. Unfortunately no Gentlemen’s classification.